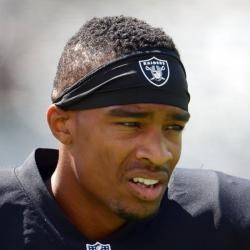 Rod Streater has been placed on season-ending IR with a neck injury.

Streater played in three games this season and was limited to no receptions and a single carry. As such, he wasn't fantasy relevant.

Streater will join a Bills wide receiver depth chart full of question marks outside of Sammy Watkins and Zay Jones. The 29-year-old wideout, who only played in 20 games since 2014, will likely have to compete for a roster spot for the 2017 season. Despite the underwhelming core of talent surrounding him, Streater is no shoe-in to make the final cut.

In Saturday's road win in Los Angeles, 49ers wide receiver Rod Streater caught 6-of-7 targets, averaging 10.5 yards per catch, and secured a longest catch of 17 yards. The effort represented more than a third of Streater's production for the season, which stands at 17 receptions, 186 yards and two touchdowns.

The 49ers started Streater in a receiving corps decimated by injuries to Torrey Smith and Quinton Patton. While Streater has featured in every game this season, this is the first time he started. It was a good day to play, as Colin Kaepernick completed 28-of-38 passes, throwing for 266 yards and two touchdowns. Streater touched the ball once in the first half but featured heavily in the fourth quarter, especially in the 49ers game-winning drive to the endzone. While he's sure to see similar playing time next week against the Seattle Seahawks, it will be difficult for Streater to replicate this performance against one of the stingiest defenses in the league.

The 49ers needed wide receiver help after losing Bruce Ellington for the year earlier in the preseason and traded for Streater on Saturday. Streater is expected to compete for the No. 3 receiver spot on the depth chart with the recently acquired Jeremy Kerley.

The Kansas City Chiefs and WR Rod Streater agree to terms on a one-year deal worth "up to" $4.8 million according to ESPN's Adam Schefter.

Rod Streater will compete for playing time on a Chiefs team that is desperate for wide receiver help. Outside of Jeremy Maclin, there is a gaping hole at the WR2 and WR3 spots on the Kansas City depth chart and the job is Streater's to lose, or win. Streater only played in four games over the past two seasons and caught an underwhelming 10 passes for 92 yards and a touchdown over that span.