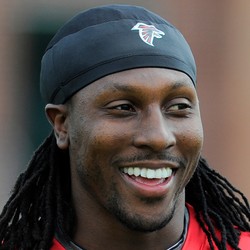 White has retired from the NFL after 11 seasons, all of which, with the Falcons. White, 35, retires as Atlanta's all-time leader in receptions (808), yards receiving (10,863) and touchdowns receiving (63).

Former Atlanta Falcons WR Roddy White spoke to WZGC-FM in Atlanta via CBS Atlanta about his struggles during the 2015 season this week. "They had a role for me coming into the season, and I feel it wasn't told to me prior to the season," White said. "I'm completely fine if someone sits me down and says 'This is what we want you to do', but I didn't get fully where they were going with me." White continued, "After that, I sat down with Kyle (Shanahan) and I thought things would change, and they didn't change." White was released by the Falcons earlier in the offseason and remains unsigned.

Roddy White is a free agent and is currently looking for a new team entering the training camp portion of the offseason. In 2015, the 11-year veteran had his worst statistical season since 2006 and appeared to be phased out of the offense in Atlanta. He finished the down year with 43 receptions for 506 yards and a touchdown. White should remain off of the fantasy radar for the upcoming campaign until he signs with a new club and his role is established.,

Roddy White is coming off of a dismal year in 2015. The veteran receiver finished the year catching 43-of-70 targets for 506 yards and a touchdown.

Roddy White was released by the Atlanta Falcons on Wednesday.

The Falcons' all-time leading receiver, White, spent 11 seasons wth the club. He was supposed to make $4.25 million with the team this season and the receiver recently stated that he was expecting to return for his 12th season with the team. It makes sense for the Falcons for move on from the 34-year-old though, after he publicly complained about the team phasing him out of the offense more and more last season. It would be tough to bet on White having a major role on offense with any team in 2016 aside from being a decoy or a blocker.

For his part, Roddy White hopes to remain with the Falcons, noting that it would be a "tragedy" if he had to go elsewhere to play. At this point, it's unclear what the Falcons' plans are when it comes to White.

It's certainly a sensitive situation considering White's production with Atlanta over the years. However, those numbers dropped in a big way in 2015, and it's not clear what the future holds for White and the Falcons. It does seem like he expects to pursue other opportunities, not necessarily retire, if he and the Falcons can't reach an agreement.