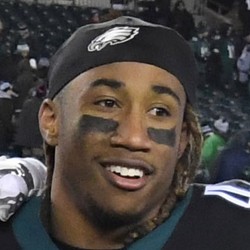 Ronald Darby finished Sunday’s 37-31 loss to the Dolphins with three solo tackles and an interception.

Darby has 29 tackles and two interceptions through Week 13. He can be left on waivers in most leagues.

Darby currently has eight total tackles and one interception this season. He should be widely available for IDP owners in deeper leagues. He is worth stashing in deeper leagues if he keeps this pace up through the rest of the season. Keep an eye on Darby at least one more week.

Eagles cornerback Ronald Darby (ACL) is expected to start training camp on PUP list, according to a report from NFL insider Ian Rapoport. Rapoport adds that Darby being active for Week 1 of the regular season is still a "legit possibility," however.

Darby tore his ACL last November but chose to re-sign with the Eagles on a one-year deal in free agency. Being ready for Week 1 was always the goal, and beginning training camp on the PUP list is not be surprising for a player just seven months removed from a major knee injury. Look for updates on his status in the coming weeks.

Darby, who is set to become an unrestricted free agent in March, finishes the season with 43 tackles and one interception in nine games. It’s a tough blow for the defending champs who came into Sunday without fellow starting cornerbacks Jalen Mills (foot) and Sidney Jones (hamstring). Things could get ugly for the already struggling Eagles secondary which still has Michael Thomas, Odell Beckham, Amari Cooper, Brandin Cooks, and DeAndre Hopkins left on schedule. Rasul Douglas, Avonte Maddox and Chandon Sullivan will compete for increased snaps in Darby’s absence.

Alex Johnson38 weeks ago
Ronald Darby has another solid game

Darby, the 18th-ranked DB to this point in the fantasy season, has consistent opportunity in the Eagles' defense and has made the most of it. He's a solid play at corner every week.