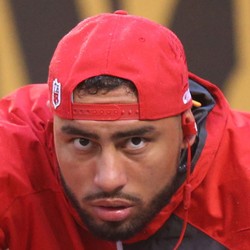 Ross Travis caught his only target for one yard on Sunday as the Colts lost to the Buccaneers by a 38-35 score in Week 14 action.

The Colts picked up Travis after Eric Ebron went on the IR two weeks ago. The 26-year-old is a journeyman having bounced around the league since 2016 and is not worth owning in fantasy.

Ross Travis caught two of three targets for 31 yards on Sunday as the Colts lost to the Titans by a 31-17 score in Week 13 action.

Travis was just signed this week as the Colts were looking for depth at tight end with Eric Ebron done for the year and Mo Allie-Cox banged up. The 26-year-old TE caught his first pass since 2017 in his last stint with the Colts. Travis can be left on the waiver wire.

Ross Travis caught one pass on two targets for six yards as the Colts lost to the Bears in preseason action on Saturday.

Travis missed the entire 2018 season after suffering a torn ACL in the final week of the preseason but is healthy this year and is fighting for a roster spot. He is currently behind Eric Ebron, Jack Doyle, and Mo Alie-Cox on the depth chart and will need a strong showing in the final preseason game.

Ross Travis caught one pass for a 24-yard touchdown on Saturday as the Colts lost to the Browns in their second preseason game.

With 10 career receptions to his name, Travis was on the roster bubble for Indianapolis before he suffered a torn ACL in the final week of the 2018 preseason. Once again he is in a battle to make the team this season and will need a good showing in the last two preseason games.

Ross would not have made the Colts final roster with the team already rostering Jack Doyle, Eric Ebron, and Eric Swoope. The 25-year-old tight end has 10 receptions for 91 yards and zero touchdowns through 21 NFL games.

John Aubin2 years ago
Who Should I Draft?
Most Accurate Experts
for Tight Ends
Do Not Sell
Are you looking to contact Customer Support about a subscription or account related question?
Yes
No, I'm a California resident looking for the California Consumer Privacy Act form