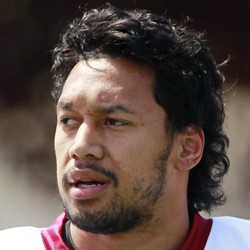 According to Vic Tafur of the San Francisco Chronicle, the Oakland Raiders are expected to part ways with veteran running back Roy Helu (hip). Helu had struggled to remain healthy since signing with the Raiders in 2015.

The Oakland Raiders are cutting ties with Roy Helu due to his ongoing health related issues. The Raiders will head into the 2016 season with Latavius Murray and DeAndre Washington as their top two running backs.

Entering his sixth season in the NFL, Roy Helu is in danger to be released by the Oakland Raiders due to hs inability to remain healthy. In 2015, Helu appeared in nine games and rushed for 39 yards. He has zero fantasy value heading into the 2016 fantasy football campaign.

Roy Helu may not break camp with the Raiders given the team's younger options at RB with similar abilities.

Helu was a popular PPR pick in 2015 considering his track record and how he was expected to be utilized by the Raiders. However, he's seen his opportunity derailed by injuries, and he's again recovering from a hip ailment. There seems to be a real chance he'll be on the outside of the roster bubble looking in by the time the regular season begins.

Oakland Raiders RB Roy Helu (hip) is expected to be available for the team's training camp that begins in July. The veteran running back did not participate in any of Oakland's offseason workouts as he was recovering from hip surgery.

Roy Helu is entering his sixth year in the NFL and second with the Raiders. Helu is expected to make the roster in 2016, but his role remains in question. Rookie DeAndre Washington is expected to be the No. 2 back behind Latavius Murray, who will once again be the starter. Helu will likely compete with Taiwan Jones for the No. 3 spot which he should win if he can stay healthy. Helu should not be on the fantasy radar heading into fantasy draft season.

ESPN's Adam Caplan reported that Raiders running back Roy Helu recently had surgery for a "hip impingement," and that he's expected to have the same surgery on his other hip.

Helu signed a two-year, $4.1 million contract prior to the start of last season. He was to complement Latavius Murray and possibly be the third-down back. Unfortunately, he was only able to appear in nine games. He rushed 17 times for 39 yards and caught nine passes for 75 yards with one receiving touchdown. The Raiders' front office has made the run game a priority this offseason and been discussing bringing in another back. Helu has a cap hit of $2 million for the 2016 season, so it seems highly unlikely that he would make the roster after two offseason hip surgeries.