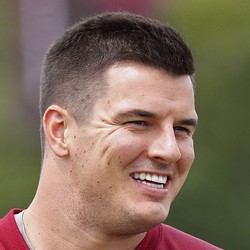 Kerrigan is having a slow year totaling 20 total tackles, four sacks, and one forced fumble through Week 11. He should be left on waivers and is considered a matchup dependent IDP option.

Ryan Kerrigan recorded four solo tackles, one assisted tackle, one tackle for loss, one pass defensed, one forced fumble, and two sacks in Washington's Week 7 victory over the Dallas Cowboys.

Kerrigan is capable of this kind of production, but he's been a huge disappointment to this point in the season. With three sacks in his last three games, though, Kerrigan's arrow is pointing up. Consider picking him up if he was dropped in your league.

Liz Clarke of the Washington Posts reports that "Outside linebacker Ryan Kerrigan, who broke a bone in his right hand in the 31-30 victory over Tampa Bay, was a full participant in the early portion of practice thatâ€™s open to the media. Kerrigan worked with a heavy bandage on his hand."

Along with DeAngelo Hall and Chris Culliver, it looks the defense is getting as many reinforcements back as possible before their match up with New England. Kerrigan had 16 combined tackles and 3.5 sacks in his first seven games this season.

The deal has $24.28M guaranteed. Kerrigan is only 26 years old and has averaged 9.5 sacks per season in his four years with the team. The Redskins continue the process of building up young talent at all positions and developing the quarterback last. Locking up Kerrigan is a big step of that process so they retain the young talent they draft.

Ryan Kerrigan's recovery from arthroscopic knee surgery is on schedule and he should be ready to take part in the team's training camp.

Once he builds up strength in the knee then he'll be able to participate. He's got nice value in IDP leagues after coming off a year where he recorded a career-high 13.5 sacks. He's also never missed a game in his four-year career.

Jonathan Ebanks5 years ago
Who Should I Draft?
Most Accurate Experts
for Linebackers
Do Not Sell
Are you looking to contact Customer Support about a subscription or account related question?
Yes
No, I'm a California resident looking for the California Consumer Privacy Act form