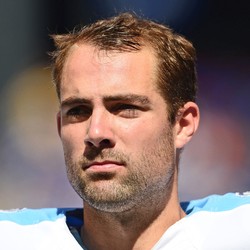 Ryan Succop missed his only field-goal attempt and was 3-for-3 in extra-point tries on Sunday as the Titans lost to the Texans by a 24-21 score in Week 15 action.

Succop is now 1-for-6 in field goal attempts since coming off of the IR in Week 9 for the Titans. With the team battling for a playoff spot it wouldn't be a surprise to see the team consider a change at the position. Succop should not be owned in anything but the deepest of fantasy leagues.

Ryan Succop missed his only field-goal attempt but did make all six of his extra-point attempts in the Titans' Week 14 win over the Raiders.

Succop has struggled with his field goal attempts since coming back from injury five games ago. The veteran kicker is now 1-for-5 and is in danger of losing his job unless he can start to get hot.

Ryan Succop made his only field goal attempt and was 4-for-4 in extra-point tries on Sunday as the Titans beat the Colts by a 31-17 score.

Succop made his first field goal after going 0-for-3 in his first three games back from the IR. The veteran kicker is on the hot seat with the team bringing in a kicker for an audition last week and fantasy owners should be leaving Succop on the waiver wire.

Ryan Succop did not attempt a field goal and was 6-for-6 on extra-point attempts on Sunday as the Titans beat the Jaguars by a 42-20 score.

Succop has played in three games since coming off the IR and has yet to make a field goal. But the veteran kicker is 11-for-12 in extra-point tries. Succop is not a standard league own but is worth grabbing in deeper fantasy formats.

Ryan Succop was 3-for-4 in extra-point attempts and did not have a field goal try as the Titans beat the Chiefs by a 35-32 score in Week 10 action.

Succop played just his second game this season as he returned in Week 9 from the IR. The veteran kicker has struggled so far but should be able to turn things around and is worth adding in 14 team leagues and deeper.

Deposit $10 at a DFS partner site you have NOT played at and get a FREE 6 Month HOF Subscription!
Claim Offer
Most Accurate Experts
for Ryan Succop
Consensus Rankings
View all Flex Rankings