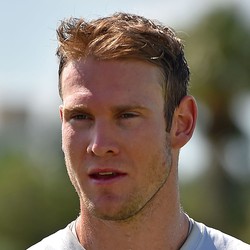 Ryan Tannehill was 21-for-31 for 209 yards with two touchdown passes while also rushing three times for 11 yards as the Titans lost to the Chiefs in the AFC Championship on Sunday.

The Chiefs took a big lead in the second half forcing Tannehill to pass as the Titans had to abandon Derrick Henry and the run. The veteran QB came up short but overall had a strong postseason. Tannehill will be a free agent but expect the team to try to hold onto him as the offense responded to him when he took over for Marcus Mariota early in the season.

Tannehill completed seven of 14 passes for 88 yards with two touchdowns and no interceptions in the Titans' 28-12 divisional-round win over the Ravens on Saturday. He also rushed six times for 13 yards and another score.

Tannehill attempted fewer than 16 passes and threw for less than 90 yards for the second straight game. The veteran QB also has thrown for two touchdowns and rushed for another in both playoffs wins for the Titans. Tannehill will have a tough matchup in the AFC Championship but should once again be an effective game manager and will use Derrick Henry often on the ground.

Ryan Tannehill completed eight of 15 pass attempts for 72 yards, a touchdown and an interception in the team's Wild-Card Round win over New England. He added four carries for 11 yards.

Tannehill's main job in the playoff win was to hand Derrick Henry the ball and watch him run which was successful. The Titans will need the veteran QB to do more in the second round when they face the Ravens in what will be a tough matchup.

Ryan Tannehill completed 13-of-20 passes for 198 yards and two touchdowns in Tennessee's Week 17 win over the Texans by a 35-14 score.

Tannehill took a backseat to Derrick Henry and the running game as he only needed to throw 20 passes in the win on Sunday. The Titans and Tannehill will now face the Patriots on Wild Card weekend.

Ryan Tannehill completed 17 of 27 pass attempts for 272 yards and three touchdowns in the team's Week 16 loss to the Saints. He also added eight yards on the ground.

Tannehill was without his stud running back Derrick Henry on Sunday but was still able to have a big game for fantasy owners. The veteran QB has been impressive since his Week 11 bye and is worth owning in most fantasy leagues going into Week 17 when the team faces the Texans.

Deposit $10 at a DFS partner site you have NOT played at and get a FREE 6 Month HOF Subscription!
Claim Offer
Most Accurate Experts
for Ryan Tannehill
Consensus Rankings
View all Flex Rankings