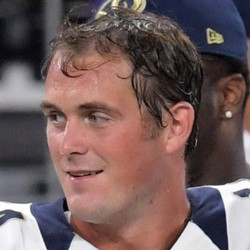 Sean Mannion completed 12 of 21 pass attempts for 126 yards and two interceptions, adding no gain on one carry in the Vikings’ 21-19 loss to the Bears on Sunday.

Mannion drew the start Sunday, as Kirk Cousins acted as a backup. The Vikings locked up the No. 6 seed with no room for movement, so playing Cousins made no sense.

None of the starters played for the Rams in this one. Mannion's highlight was a 47-yard catch by KhaDarel Hodge. Mannion likely won't have much fantasy value even in the event of a Jared Goff injury.

Coach Fisher considered benching QB Case Keenum for backup QB Sean Mannion on Monday night. He didn't but it looks like Coach will go with QB Sean Mannion and QB Jared Goff for Week 2 against the Seahawks after Keenum completed less than 50% of his passes in Week 1.

It's a blow to all Rams offensive players. RB Todd Gurley and WR Tavon Austin's projections will take a hit. Gurley had no running room against the 49ers and will have a tough time with the Seahawks top DST. Rams are a team to avoid in fantasy.

Sean Mannion was a 3rd round pick in 2015 out of Oregon State. Mannion is now the No. 2 QB for the Rams behind QB Case Keenum and in front of No. 1 overall pick Jared Goff. Mannion threw for 135 yards and a TD last night earning his No. 2 role.

None of these QB's have any fantasy value. The Rams will try to win games behind RB Todd Gurley and a strong defense.

The Rams selected Oregon State quarterback Sean Mannion with the 89th overall pick in the third round of the 2015 NFL Draft.

Mannion is impressive when he has the time to operate. He is tall and smart but not likely to carry an NFL offense on his own. Brice Petty and Nick Hundley both probably have more upside, but Mannion fits with the power running attack the Rams are building and has more experience with a pro-style offense. The Rams have stocked up on offensive lineman in this draft, so his protection shoud be improved compared with what Sam Bradford, Austin Davis, and Shaun Hill had to work with in 2014. It wouldn't be surprising to see Mannion overtake Case Keenum as the Rams' primary backup to Nick Foles.