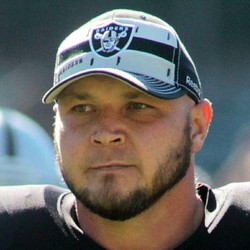 Janikowski spent 18 seasons with the Raiders before playing last year with the Seahawks, making over 80 percent of his career FG attempts. He calls it quits as the Raiders’ all time leading scorer. His retirement leaves Tom Brady as the last active player from the 2000 NFL draft class.

Janikowski suffered a game-ending lower-body injury trying a 55 plus yard kick at the end of the second half. Not only did he miss, but he also did not return to the game, which likely made a difference in Seattle's game-planning the rest of the way. Janikowski could retire this offseason.

Sebastian Janikowski converted 5-of-5 PAT attempts and 1-of-2 field goal tries in Week 16 versus the Chiefs.

It was another solid performance for the lefty kicker. Still, there are usually better options for fantasy players. Janikowski gets the Cardinals in Week 17.

Sebastian Janikowski hit his only field goal attempt in Seattle's 26-23 overtime loss to the 49ers.

He also went 2-for-3 on PAT attempts. Seabass has been relatively solid all year, but fantasy players can look for kickers in a better offense when filling out lineups.

He also converted his lone PAT attempt. Seabass isn't a bad kicker by any means, but fantasy players can likely search for someone in a higher scoring offense.

Deposit $10 at a DFS partner site you have NOT played at and get a FREE 6 Month HOF Subscription!
Claim Offer
Most Accurate Experts
for Sebastian Janikowski
Consensus Rankings
View All Rankings