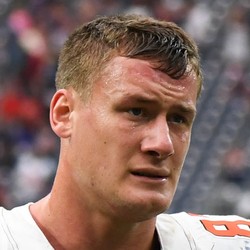 Following his release by the Panthers on June 4, 2020 Seth DeValve underwent toe surgery today and is expected to make a full recovery in approximately 10 to 12 weeks (mid to late August). Renowned Dr. Robert Anderson repaired a tendon and removed a cyst from one of DeValve's toes.

A former fourth round selection by the Browns in 2016, DeValve started a career high six games for the Jaguars in 2019. The 29 year old veteran tight end has 60 receptions for 736 yards with four touchdowns in his career. His chances of signing a deal before the start of the regular season seem unlikely at this point, but don't be surprised if he joins a club mid-season.

Matthew Judd4 weeks ago
Seth DeValve released by the Panthers

TE Seth DeValve was released by the Panthers on Wednesday, citing a non-football injury.

The Panthers signed DeValve earlier this off-season, but ultimately cut ties with the veteran tight end on Wednesday. He hauled in 12 receptions for 140 yards across 12 games for the Jaguars in 2019. DeValve will look to latch onto another team during the off-season.

Tom Pelissero on Twitter is reporting that agent Chris Cabot of Steinberg Sports has stated that free agent tight end Seth DeValve has agreed to terms with the Carolina Panthers.

With the signing of DeValve, the Panthers are hoping that he can help fill the void left by former pro-bowler Greg Olsen who signed with the Seahawks earlier this offseason. DeValve will compete with Ian Thomas who should have the initial lead to claim the starting tight end position for the Panthers. The battle between these two during offseason training and training camp should be intriguing. DeValve is worth a speculative add in dynasty tight end premium leagues.

Seth DeValve caught his only target for four yards on Sunday as the Jaguars defeated the Colts by a 38-20 score in Week 17 action.

DeValve has been at the top of the depth chart at tight end for the Jaguars but has done little with his opportunity. The veteran finishes 2019 with 12 catches and 140 yards receiving over 12 games.

Seth DeValve caught three passes on six targets for 45 yards on Sunday as the Jaguars lost to the Falcons by a 24-12 score in Week 16 action.

DeValve saw all the targets for the Jaguars tight ends on Sunday as he continues to sit atop of the depth chart for the team. With just 11 catches on the season, the veteran tight end can be left on the waiver wire by fantasy owners.

John Aubin28 weeks ago
Who Should I Draft?
Most Accurate Experts
for Tight Ends
Do Not Sell
Are you looking to contact Customer Support about a subscription or account related question?
Yes
No, I'm a California resident looking for the California Consumer Privacy Act form