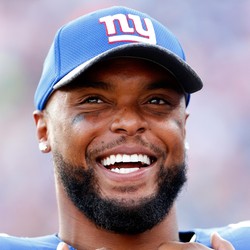 After appearing to injure his finger or hand during the Saints' final preseason game, New Orleans has placed veteran running back Shane Vereen onto injured reserve. Vereen signed with the club back in July.

Vereen, 29, is a one-dimensional satellite back who wasn't a good complimentary piece for the Saints talented pass-catching runners. Having never rushed for 400 yards in a season and scoring one total touchdown since 2015, Vereen is well off the fantasy radar.

Times-Picayune columnist Jeff Duncan thinks that 29-year-old veteran running back Shane Vereen likely hasn't done enough to make the club's Week 1 roster. Needing a big performance in the Saints' third preseason game, Vereen rushed two times for two yards and tallied three catches for 18 yards. "Vereen didn't play poorly but he also didn't stand out, and that's been a recurring theme for him throughout the preseason," wrote Duncan. "If the Saints keep only three tailbacks, he likely is on the outside looking in because he doesn't play special teams."

That lack of special teams duties won't help Vereen's cause. Never able to advance beyond 'satellite back' status, Vereen's strengths don't separate him from Alvin Kamara. Trey Edmunds and Boston Scott are most likely competing for the Saints' RB3 job.

Still looking to shore up the backfield in the wake of Mark Ingram's four-game suspension to open the 2018 season, the New Orleans Saints have agreed to terms with 29-year-old free agent RB Shane Vereen, who spent the past three years playing sparingly for the New York Giants. Vereen, a pass-catching specialist, is likely being brought in to keep Alvin Kamara fresh during camp and the preseason. It will be hard for the eighth-year pro to make the 53-man roster as part of a young and talented Saints' backfield.

Vereen is a solid pass-catcher but has never exceeded 96 carries or 391 rushing yards in any of his eight seasons. He's simply not much of a rusher and thus a poor replacement for Ingram's role. Unless something changes as the regular season approaches, this move isn't likely to have significant fantasy implications.

Shane Vereen saw a limited role this week after not having any touches last week against Arizona. Vereen carried the ball three times and gained 14 yards, being held without a reception.

Vereen may have played his last game as a Giant, as his impact all year was minimal and didn't add any jolt to a Giants' offense that sputtered all season. Vereen still can be a solid third down back somewhere but the peak of his effectiveness may have passed.

Shane Vereen had no carries or receptions during the Giants' 23-0 shutout against the Cardinals.

Vereen has been an afterthought all season but it is still surprising to see him get no touches at all during a game. He could very well be a cap casualty as the Giants' head into rebuilding for 2018.