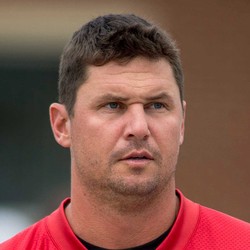 Newly minted starter Shaun Hill completed 18 of 33 passing attempts for 236 yards in a win over the Tennessee Titans on Sunday night. He added 8 yards rushing on two carries.

Anyone starting Teddy Bridgewater's backup likely had low expectations for fantasy production, and Shaun Hill certainly met them. The Vikings didn't ask Hill to do much, keeping most of his passes relatively close to the line of scrimmage, and while he failed to produce any touchdown passes, Hill did do a good job of protecting the football. Expect Sam Bradford to take over the starting job sooner rather than later as he learns the playbook and Minnesota's coaches become impatient with Hill's limited physical tools.

Quarterback Shaun Hill will start over Sam Bradford for the Minnesota Vikings Week 1 against the Tennessee Titans, according to sources.

There had been whispers of this throughout the week, but now it is officially confirmed. Despite giving up 1st- and 4th-round draft picks, the Vikings are not comfortable with where Bradford is at in terms of knowing the playbook. Hill will likely be tasked with simply avoiding any mistakes and handing the ball off to Adrian Peterson. Hill is not on the fantasy radar in any formats except as a possible cheap play in DFS leagues, whereas Peterson is an elite play in Week 1.

Shaun Hill will likely assume starting QB duties for the Vikings after Teddy Bridgewater's devastating knee injury. The Vikings are looking for other QBs, but Hill is the most logical choice for the time being.

Hill is a 36-year-old veteran who should be able to do what the Vikings need him to do; manage games and not turn the ball over. But management is not good for fantasy purposes and will hurt all Vikings with the exception of maybe Adrian Peterson. That being said, defenses will likely load the box and force Hill to throw.

Brad Cowger3 years ago
Shaun Hill gets the start against Seattle

Shaun Hill got the start with Teddy Bridgewater sitting out in Thursday's preseason win against the Seahawks, completing 10-of-17 passes for 129 yards.

Hill is a great backup QB for Minnesota. The 36-year old has 14 years of experience and can teach a young star in Teddy Bridgewater a lot about the position. If anything were to happen to Bridgewater, the Vikings would be confident with Hill behind center.

The 35-year-old Hill has nine years of NFL experience dating back to his first season, 2005, with the Vikings. He's gone on to start 34 games in 43 appearances with three different teams (San Francisco, Detroit, St. Louis).

Even though he only has a 16-18 record as a starter, Hill's posted 49 touchdowns and 30 interceptions with a QB rating of 85.5. He also has put together four-game winning drives. Hill is a fine backup behind second-year pro Teddy Bridgewater. He's certainly an upgrade over the 2014 duo of Matt Cassel/Christian Ponder. Hill could have QB2 value at some point this season.