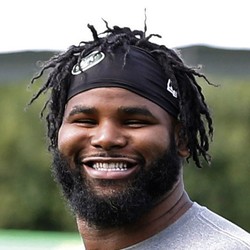 Richardson exploded against Miami on a day the team was missing Myles Garrett and Larry Ogunjobi to suspension and Olivier Vernon to a knee injury. However, their absences were made irrelevant by Richardson's outstanding play and Miami's inability to block. Richardson will try to help the Browns get their fourth straight win against the Steelers next week.

The Browns have signed DT Sheldon Richardson to a three-year deal.

Richardson, formerly with the Vikings, gives Cleveland another solid piece in the middle to play beside Larry Ogunjobi. Cleveland's defense showed flashes in 2018 and is a favorite to take a big step forward in 2019 ala the Jaguars in 2017.

Blaine Blontz50 weeks ago
Sheldon Richardson continues to do nothing

Sheldon Richardson recorded one solo tackle and one assisted tackle in the Minnesota Vikings' Week 7 win over the New York Jets.

Richardson has a total of 22 tackles and one sack through almost half a season with the Vikings. He's been a huge disappointment.

ESPN's Adam Schefter is reporting that the Vikings are signing defensive tackle Sheldon Richardson to a one-year deal.

The Vikings defense was already among the best in football, though this signing takes it up another notch. Richardson will add a piece to the defensive line that is expected to lose defensive tackle Tom Johnson in free agency. Playing in a division against Aaron Rodgers, Matthew Stafford, and Mitchell Trubisky, the addition of Richardson should create much-needed pressure up the middle. He only recorded one sack in 2017, but he had 28 quarterback hurries which tied for seventh among defensive tackles. While we don't advocate drafting defenses outside of your final draft pick in fantasy football, the Vikings make a strong case to maybe snag them a round or two before your final pick.

Sheldon Richardson recorded six tackles, including four solo tackles in the Seahawks' win over the 49ers.

Richardson tied his season-high in tackles that he set last week against the Falcons. Richardson will look to keep his recent success going on what has otherwise been a lackluster season compared to previous campaigns.