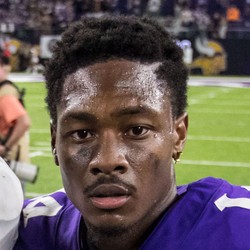 Diggs gives Buffalo a very formidable 1-2 punch with him and Smokey John Brown on the outside. The Bills could still use some size at the WR position, however Diggs gives them plenty of play-making ability. The Bills are doing all they can to put some real talent around QB Josh Allen. Diggs was visibly upset at times in Minnesota last season, so it’s probably for the best that he gets a shot with a new team. Consider Diggs a WR2 in Buffalo as he’ll be sharing targets with Brown, and Josh Allen doesn’t throw the ball as much as some other quarterbacks do. That being said, Diggs should still be a focal point of the offense.

Addressing the media at the NFL Combine, Vikings general manager Rick Spielman said "there is no reason to anticipate that Stefon Diggs is not going to be a Minnesota Viking."

This continues to be the party line in Minnesota, and it seems like it's the truth. The Vikings figure to again contend in the NFC, and they have no incentive to trade the dynamic Diggs. While there may continue to be frustrations, both for Diggs and fantasy owners, it doesn't appear that he'll be playing elsewhere in 2020.

Diggs has made his frustrations known with the run-first offense and team in general, though he continues to produce and Minnesota looks to again be a contender in the NFC. It's hard to imagine why the Vikings would trade Diggs since he's continued to produce. If he remains in Minnesota, he'll likely continue to be a volatile WR2 for fantasy purposes.

Stefon Diggs caught two of five targets for 57 yards and a touchdown in the Vikings’ 27-10 loss to the 49ers on Saturday.

Diggs scored Minnesota's only touchdown of the game, stepping into the end zone on a 41-yard catch-and-run in the first quarter. He looked like he was liable to explode after the early score, though No. 14 wasn't heard from again until the fourth quarter, when he grabbed a 16-yarder to round out his team-leading yardage total. Despite snagging the second-lowest receptions of his career (63) in the regular season, Diggs amassed career highs in receiving yards (1,130) and yards per catch (17.9), showing off his big-play abilities. Diggs will look to extend his 1,000-yard season streak to three in 2020.

Stefon Diggs has missed portions of practice Tuesday and Wednesday due to an illness.

Despite the missed practice time, there is not a concern that Diggs will miss the team's matchup with the 49ers this weekend. Diggs is one of the top wide receivers going this weekend, but he carries a low floor with his high ceiling.

Deposit $10 at a DFS partner site you have NOT played at and get a FREE 6 Month HOF Subscription!
Claim Offer
Who Should I Draft?
Most Accurate Experts
for Stefon Diggs
Consensus Rankings
View All Rankings
Do Not Sell
Are you looking to contact Customer Support about a subscription or account related question?
Yes
No, I'm a California resident looking for the California Consumer Privacy Act form