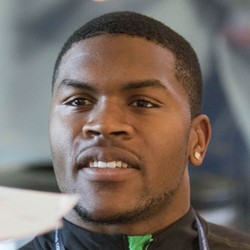 2015 first round pick LB Stephone Anthony is not projected to make the final roster per espn.com after missing final preseason contest with an injury only described as "nicked up".

Anthony has never completely lived up to his draft status for New Orleans after being selected 31st overall in the first round of the 2015 draft. After producing quality stats for fantasy owners his rookie season he has offered very little since. The writing seemed to be on the wall coming into 2017 when the Saints signed veterans A.J. Klein and Manti Te'o, and only then went on to select Alex Anzalone out of Florida in the third round of this years draft class. Currently, those three are the projected starters for New Orleans leaving Anthony and his rookie contract expendable. He could resurface if released on another NFL roster but at this point would be hard to believe as a potential starting player. New Orleans gave him ample time to secure a position with the starting defense that so desperately needed him. His arrow is pointing down whether or not New Orleans decides to cut him.

The Saints selected ILB Stephone Anthony with the 31st pick in the draft, which was received in the trade of Jimmy Graham.

Anthony should step in and be an immediate starter on a defense that struggled last year and lost their leading tackler in Curtis Lofton. Anthony should be able to get a ton of tackles and be a potential play in any IDP formats.

Matt Martens5 years ago
Most Accurate Experts
for Linebackers
Do Not Sell
Are you looking to contact Customer Support about a subscription or account related question?
Yes
No, I'm a California resident looking for the California Consumer Privacy Act form