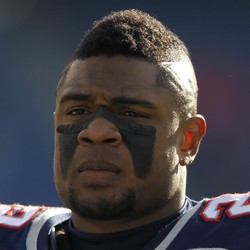 Pittsburgh Steelers running back Stevan Ridley picked up 16 yards on three carries in his team's 17-10 win over New England in Week 15.

Ridley played behind rookie Jaylen Samuels, who was the team's workhorse back. With James Conner tentatively due back in Week 16, what little fantasy value Ridley had will evaporate.

Pittsburgh Steelers running back Stevan Ridley carried the ball five times for four yards and a touchdown in a 24-21 loss to the Raiders in Week 14.

Ridley played behind rookie Jaylen Samuels but he was able to cash in a two-yard touchdown. The veteran runner was a non-factor in the passing game, where Samuels is expected to do most of the heavy lifting. Provided James Conner doesn't play, Ridley should remain involved in Week 15 against his old team, the Patriots.

While Jaylen Samuels told reporters that he will be the team's start in place of James Conner, Stevan Ridley will share time at running back.

The expectation is that Samuels will be the more fantasy-relevant RB in a system that has traditionally used one back as the primary ball carrier. However, there's a chance that Ridley could step into a fantasy-relevant role depending on how the split is handled. He's not a bad stash for those who miss out on Samuels, at least until we see how this plays out.

Pittsburgh Steelers running back Stevan Ridley rushed eight times for 26 yards in his team's 52-21 win over the Panthers in Week 10.

Ridley saw some extra run after James Conner left early to be checked for a concussion. The veteran running back could lose his job next week as signs point toward Le'Veon Bell returning to the team.

Stevan Ridley carried the ball once for two yards in Sunday's win over the Bengals.

Ridley continues to play behind James Conner, and the Steelers continue to be a team that utilizes the bell-cow system. As such, Ridley won't be fantasy-relevant unless there's an injury to Conner.