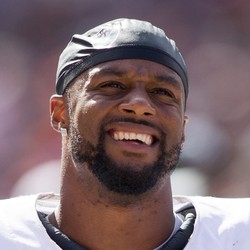 Taiwan Jones caught his only target for 34 yards on Saturday as the Texans beat the Bills by a 22-19 score in the Wild Card round.

Jones was hardly used all this year with just one catch and nine rushes on the season. But he made a big play in the Wild Card win with his catch. The Texans will face either the Chiefs or the Ravens in the Divisional round and it will be highly unlikely that Jones gets utilized.

Taiwan Jones rushed seven times for 28 yards and added an 11-yard catch on his lone target while also losing a fumble in Thursday's 28-26 preseason opening loss to the Packers.

Jones is fighting for a roster spot and has a chance to be #3 on the depth chart. But the 31-year-old veteran can not afford any more fumbles. Jones is not worth drafting in any fantasy leagues.

Taiwan Jones has a knee issue and is listed as questionable for Sunday's game against the Broncos.

Jones has minimal value in PPR leagues, but you should look for better options for either your playoff lineup or final week to qualify.

Steve Anagnos4 years ago
Taiwan Jones with a critical fumble

Taiwan Jones carried twice for zero yards and caught one pass for six yards before fumbling on a kick return. He was benched for the remainder of the game.

Jones has always had ball security issues. That was one of the reasons the prior regime moved him to cornerback. It's too bad as he is explosive and was carving out a nice niche for himself. After Murray went down with a concussion, it was Marcel Reece who took over the running back duties.

Jones is fast, explosive, and has been compared to Jamaal Charles. If Murray was to go down, I don't think Jones would fill into his role though. It would probably be RBBC with Marcel Reece and Roy Helu. With that said, Bill Musgrave is giving him playing time and getting him in space. With his explosion, he can take it to the house on any touch. He's worth a spot in leagues with deep benches.