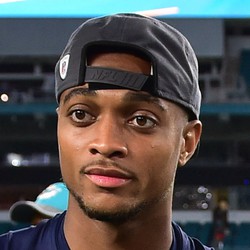 Tajae Sharpe didn't record a catch on one target in Tennessee's Conference Championship loss to the Chiefs by a 35-24 score.

With Adam Humphries back on Sunday, Sharpe fell down the depth chart and was not a factor for the Titans. The 25-year-old receiver finished 2019 with 25 catches and 329 receiving yards and will have to fight for a roster spot in 2020.

Tajae Sharpe didn't record a catch on two targets in Tennessee's Divisional Round win over the Ravens by a 28-12 score.

With the Titans only throwing the ball 14 times on Saturday all the team's receivers saw limited targets. Look for there to be a similar game plan for the AFC Championship and Sharpe will struggle once again to see any passes.

Tajae Sharpe 1-of-3 targets for six yards in the Titans' Wild Card win over the Patriots by a 20-13 score on Saturday.

Sharpe along with the rest of the Titans receivers took a back seat on Saturday as the team focused on running the ball with Derrick Henry and only attempted 15 passes. Look for them to have a similar game plan in the second round against the Ravens and Sharpe will only see a few targets once again.

Sharpe could not duplicate his excellent Week 16 game when he caught five passes and two touchdowns. The receiver is too far down the depth chart to be a difference maker in fantasy and finishes the year with a 25/329/4 receiving line over 15 games.

Sharpe had his best game of the season on Sunday and was the Titan's most productive receiver on the day. The veteran may get a chance to have another large role in Week 17 if Corey Davis misses the game as he is dealing with a concussion and would be worth adding in deeper fantasy leagues.