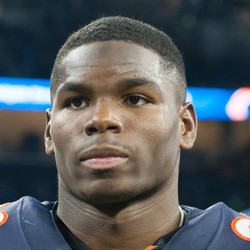 Tarik Cohen carried four times for 21 yards, adding nine receptions for 44 yards in the Bears’ 21-19 win over the Vikings on Sunday.

Cohen ends the season on a high note for PPR enthusiasts, grabbing nine balls in the upset victory. Despite mustering only 669 total yards, Cohen ends the year with a healthy 79 receptions.

Tarik Cohen carried twice for eight yards, adding three receptions for 25 yards in the Bears’ 26-3 loss to the Chiefs on Sunday.

Cohen compiled just five touches Sunday, and his output and opportunities were certainly concerning, given his penchant for working as a receiver out of the backfield. Cohen's pass-catching abilities give him a respectable floor in PPR formats, though consistency has been a major problem.

Tarik Cohen rushed eight times for 28 yards, adding seven receptions for 57 yards in the Bears’ 21-13 loss to the Packers on Sunday.

Cohen stayed involved in the offensive gameplan Sunday, finishing with seven receptions for the second time in four games. In that span, he's gone 24/136 in the receiving game and 20/69 on the ground without scoring any touchdowns. The minimal output doesn't lend itself to fantasy relevancy in standard leagues, though he's a done enough as of late to warrant weekly flex consideration in PPR formats. Cohen gets an exploitable Chiefs defense in Week 16.

Tarik Cohen carried three times for seven yards, adding six receptions for 24 yards in the Bears’ 31-24 win over the Cowboys on Thursday.

Cohen saw nine touches in Thursday's win but did little with them. It's been a disappointing campaign for Cohen after he took the fantasy world by storm last season. He's a deep-league PPR guy, though Chicago will likely be forced to pass against Green Bay and Kansas City over the next two weeks, making Cohen a potential flex in 12-team leagues due to some positive game script.

Zachary Hanshew12 weeks ago
Tarik Cohen not a factor in win

Tarik Cohen carried three times for nine yards, adding four receptions for 26 yards in the Bears’ 24-20 win over the Lions on Thanksgiving.

Cohen didn't see much work in this one, despite Mitch Trubisky throwing for a season-high 338 yards. It's hard to trust Cohen on a weekly basis, thanks to the presence of David Montgomery and the uncertainty of the Bears' offensive line.

Deposit $10 at a DFS partner site you have NOT played at and get a FREE 6 Month HOF Subscription!
Claim Offer
Who Should I Start?
Most Accurate Experts
for Tarik Cohen
Consensus Rankings
View All Rankings