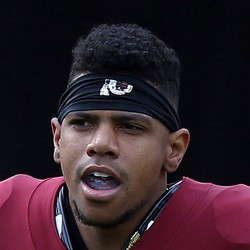 Pryor was limited in the preseason by a hamstring which hurt his chances of impressing the Jaguars enough to earn a roster spot. The veteran WR could get picked up by another team at some point this season but will not be fantasy relevant.

Terrelle Pryor has to leave Thursday's preseason game against the Dolphins due to a hamstring injury and did not return.

Pryor has been dealing with a hamstring issue for most of the preseason. The veteran wide receiver will need to get back on the field if he wants to make the team and move up the depth chart.

Pryor was not out on the field for the morning practice but eventually made his way out. The veteran wide receiver missed the first preseason game last week but there has been no word if he will suit up on Thursday.

John Aubin33 weeks ago
Terrelle Pryor to sign with Jaguars

Pryor is expected to sign with the Jaguars after working out for the team Wednesday, a source told NFL Network's Ian Rapoport.

The move would reunite Pryor with offensive coordinator John DeFilippo, who was with the Cleveland Browns when Pryor put up his only 1,000-yard receiving season back in 2016. Pryor has been a non-factor since, and is coming off a dismal 2018 campaign in which he caught just 16 passes for 252 yards and two touchdowns with the Bills and Jets.

The Bills have released Terrelle Pryor, according to Adam Schefter.

Pryor had just two catches for 17 yards in his two games with the Bills. On a team going nowhere and with little chance of production, Pryor wasn't close to fantasy-relevant. You weren't relying on him for fantasy purposes anyway, but to the extent you had him on your watch list, feel free to move on.

Deposit $10 at a DFS partner site you have NOT played at and get a FREE 6 Month HOF Subscription!
Claim Offer
Most Accurate Experts
for Terrelle Pryor
Consensus Rankings
View All Rankings