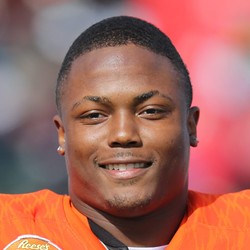 Terry McLaurin (concussion) has been ruled out for Sunday's game in Dallas.

McLaurin suffered a concussion in Week 16's loss to the Giants and has been ruled out for Week 17. He will finish 2019 with 58 receptions for 919 yards and seven touchdowns on 93 targets. With McLauin out, look for Kelvin Harmon and Steven Sims Jr to lead the Redskins receiver corps in Week 17.

Washington wide receiver Terry McLaurin remained out of practice on Thursday as he continues to work his way through the league's concussion protocol and is in danger of missing the team's Week 17 matchup against the Dallas Cowboys.

With Washington already eliminated from playoff contention, there is little incentive to play McLaurin in a meaningless Week 17 game. Still, it's possible that he plays if he is able to clear the protocol heading into the weekend. Check back in on Friday for an official injury designation.

He'll be re-evaluated on Thursday. This is his first documented concussion as a professional and occurred late in Week 16. Washington could ultimately decide to play it safe with their electrifying rookie wideout.

McLaurin led Washington in receiving again on Sunday, though he failed to find the end zone after scoring touchdowns in his previous two games. He is now at 919 yards receiving on the year and will look to top the 1,000-yard mark next week against the Cowboys in Dallas.

Washington wide receiver Terry McLaurin caught all five of his targets for 130 yards and a touchdown in Sunday's loss to the Philadelphia Eagles.

75 of those 130 yards came on one play as McLaurin caught a short slant pass and took it to the house on the team's first play after a touchback. On the season, McLaurin has caught 51 of his 84 targets for 833 yards and seven touchdowns.