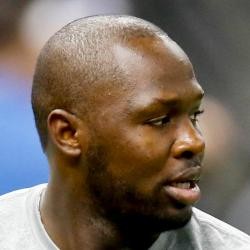 The 49ers have signed Christian Ponder and to make room for him, have placed Thad Lewis on Injured Reserve.

It's too bad for Thad, he played well during the pre-season game and looked like he could've made the roster.

Thad Lewis completed 12 passes for 97 yards in the pre-season game vs. the Texans.

Lewis was playing well before he got injured. He looked better than Gabbert, but Gabbert is still atop the depth chart.

The Philadelphia Eagles signed 30-year old quarterback Thad Lewis to back up Sam Bradford and Mark Sanchez. Lewis has played for the Rams, Browns, Lions, Bills and Texans over parts of six NFL seasons.

Lewis has played in seven career games, completing 115-of-189 passes for 1,296 yards and five touchdowns. He's likely going to have little fantasy value, unless Bradford or Sanchez go down with injury.

Thaddeus Lewis has agreed to terms with the Texans.

With Mallet out, the Texan's quarterback position is up in the air. While it is unlikely Lewis would get the job, he is worth keeping an eye on. Lewis played fairly solid for the Bills last year during E.J. Manuel's injury.