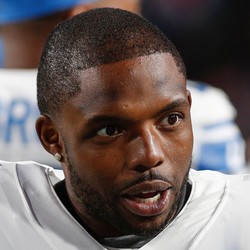 Theo Riddick (shoulder) will be placed on the injured reserve.

Riddick suffered a fractured shoulder when going out for a pass in Denver’s second preseason contest. He figures to slide into the third-down role when he returns. With Jake Butt and Drew Lock also heading to the IR, he may not guaranteed a roster spot when he returns.

Brad Camara28 weeks ago
Theo Riddick (shoulder) out against Arizona

Theo Riddick (shoulder) did not play in the Broncos' 20-7 preseason win over the Cardinals Thursday.

Riddick will have value as a mid-season pickup in PPR formats when he returns from his shoulder injury.

Theo Riddick has been diagnosed with a fractured shoulder and will be out 6-8 weeks.

Riddick won’t need surgery but it’s still a tough blow. The receiving specialist just signed with Denver after being let go by the Lions, but he’ll now miss a couple regular season games at least.

Theo Riddick rushed once for a two-yard loss and did not register a catch on two targets in the Broncos’ 22-14 preseason loss to the Seahawks Thursday.

Riddick did not manage to produce in his brief time on the field Thursday, but was heavily involved. He enters the season as the primary receiving back for Denver.

Free agent running back Theo Riddick has agreed to a deal with the Denver Broncos, according to multiple reports.

Riddick was surprisingly cut by the Lions last week and immediately visited the Saints before visiting and signing with the Broncos. While he did not rush the ball much last season, Riddick did catch 61 passes and has caught at least 50 balls in four straight seasons, including 80 receptions in 2015. His presence could take some touches away from Phillip Lindsay, at least in the passing game.

Deposit $10 at a DFS partner site you have NOT played at and get a FREE 6 Month HOF Subscription!
Claim Offer
Most Accurate Experts
for Theo Riddick
Consensus Rankings
View All Rankings
Do Not Sell
Are you looking to contact Customer Support about a subscription or account related question?
Yes
No, I'm a California resident looking for the California Consumer Privacy Act form