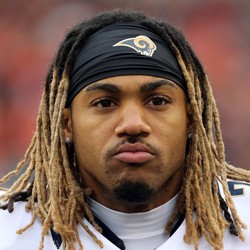 The Palm Beach Post reports Los Angeles Rams running back Tre Mason was arrested Tuesday night for "driving recklessly" in a park near Boynton Beach and "fleeing" from a Palm Beach County deputy on an ATV on July 27, 2016. After probable cause for his arrest was filed in August, a warrant was issued on Dec. 15, 2016, which ultimately led to Mason's Tuesday night capture.

Mason is in the midst of a downward spiral in his life, and in his NFL career. It began during the 2016 offseason in which he had multiple altercations with the police, he exhibited erratic behavior and was a no show for the Rams' offseason workouts and training camp. He hasn't played an NFL down since the 2015 season. Although he is under contract with Los Angeles until 2018, it is a long-shot that he plays this season as he is facing disciplinary action from the NFL stemming from his behavior, which violates league policies. Mason's professional career moving forward is up in the air.

According to the WPBF News, Los Angeles Rams RB Tre Mason has been spotted "practicing drills" in his mother's front yard in Lake Worth, Florida. Mason is currently on the Reserve/ Did Not Report list and has not yet reported to training camp.

Tre Mason appears to be on a downward spiral in his NFL career. The troubled running back's roster spot on the Rams and future in the league are currently in doubt.

The Los Angeles Rams have placed RB Tre Mason on the Reserve/ Did Not Report list on Sunday after he failed to show up to training camp.

Tre Mason is in danger of losing his roster spot on the Los Angeles Rams in 2016. Mason has had a tumultuous offseason beginning with an arrest leading to a TMZ report of the rusher's family being "extremely concerned" with his mental health. Mason's fantasy value is dwindling down to nothing heading into the regular season.

Tre Mason flashed some solid play making ability in 2014, however he took a backseat to the explosive Todd Gurley for the 2015 season. Mason was arrested for resisting arrest and possession of Cannibas in March which the NFL will no doubt hand down a harsh punishment for. This means the Rams will rely on a couple undrafted running backs and Benny Cunningham (Gurley's top handcuff) entering the 2016 season.

Los Angeles Rams running back Tre Mason was arrested in Florida for numerous offenses, including suspicion of possession of marijuana according to ESPN's Nick Wagoner.

Tre Mason will likely face repercussions from the NFL due to his arrest and marijuana possession if convicted.