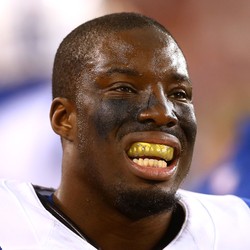 This is one of the weirder stories from the NFL this season. Vontae Davis reportedly changed into street clothes at halftime and left the stadium.

There is really no fantasy impact here. The Bills defense will continue to be one to target in fantasy football all season

Vontae Davis recorded a pass defended on five total tackles in the Colts' Week 5 win over the 49ers.

Davis, who missed the first three games of the season, is still searching for his first interception of the year.

Caleb Baggette2 years ago
Vontae Davis (groin) OUT for Week 1

Vontae Davis has been ruled out for Week 1 due to a groin injury. Rashaan Melvin and Quincy Wilson will start at CB in Week 1.

With Davis out, Sammy Watkins will see a solid boost in value as the Colts top corner will not play. However, Jared Goff as his QB doesn't help too much. Watkins is a high-end WR3 for Week 1's plus matchup.

Vontae Davis is officially active for the Colts' Week 11 game versus the Titans.

Davis cropped up on the injury report on Friday with an ankle injury but will give it a go. With the way the Titans spread the ball around, it's difficult to know how much of an impact this will have on the team's passing game, if any. But for IDP leagues, go ahead and start Davis as you normally would.

Ian Rapoport of the NFL Network reports via Twitter, that Colts CB Vontae Davis (ankle damage) will miss some games to start the 2016 season.

This is a huge blow to an already banged up Colts secondary. Last year, Vontae Davis was ranked as Pro football focus 29th best CB. Davis has been to the pro bowl in each of the last two seasons. He's had eight interceptions over the last two seasons. Head coach Chuck Pagano called his team's current cornerback situation "scary". To add depth, on Monday the Colts came to terms with veteran cornerback Antonio Cromartie