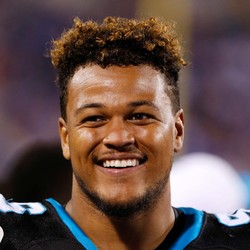 DE Wes Horton had a strip-sack on San Fransico QB Brian Hoyer early in the contest that helped set up Carolina's first score. Horton had a nice stat line as a rotational DE with two total tackles, the one sack, and the fumble recovery.

DE Wes Horton could be one to keep an eye on in Carolina's rotational roles with the aging, Charles Johnson and Julius Peppers in that rotation. More snaps could start rolling toward Horton's way if he can only prove going forward he deserves a bigger part of the pie.

Wes Horton has re-signed with the Panthers on a two-year deal. Horton was a summer cut but then was brought back due to the lack of depth for the Panthers on their front four. Horton ended up playing well finishing with 2.5 sacks.

Horton will provide depth on the front line for the Panthers but they will likely target a veteran edge rusher and/or another pass rusher in the draft.