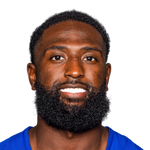 It's unclear whether or not Campbell will be on the field for 2WR sets, as T.Y. Hilton and Zach Pascal/Michael Pittman appear to be the perimeter options. With Chester Rogers gone, Campbell will play a role that netted 224 routes in 11 games last year. By comparison, Hilton ran 276 routes in 10 games, so Campbell can have a big role in the offense despite being the No. 3 receiver. Rivers has loved his targets over the middle of the field throughout his career and Campbell might be the most explosive one yet. The Jaguars have D.J. Hayden covering the slot, which might be their most stable cornerback for the time being. He allowed just 195 scoreless yards on 38 targets in coverage last year. Sure, it's a small sample size with the Jaguars, but he has held opposing quarterbacks below a 87.0 QB Rating when targeted in each of the last four seasons. You didn't draft Campbell as a starter, so sit back and watch how he's used in this game before trusting him.