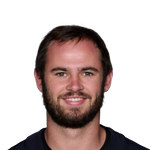 When the Raiders said that Henry Ruggs would play in the slot, it crushed the value of Renfrow, who played 71 percent of his snaps in the slot last year. Because of that, it was going to be interesting to see how they got Renfrow on the field. Now that Tyrell Williams is out for the season, it's unlikely they can get Ruggs into the slot as much as they wanted. The Raiders had three wide receivers on the field just 54 percent of the time last year, which was the eighth-lowest mark in the league. The Panthers are one of the weaker depth charts in the league when it comes to cornerback, and particularly the slot, as they're slated to have rookie Troy Pride Jr. take over that role. But again, until we know how often Renfrow will be on the field, you cannot play him in fantasy right now. Even before all these questions, he played just 34.2 percent of the snaps last year. Now adding Ruggs and Bryan Edwards, it gets a bit dicier, but Renfrow is the stable veteran. He should be considered a mediocre WR5 this week. He's not someone I'm excited to play, but he should offer a semi-decent floor.