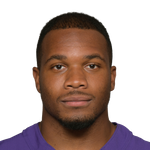 We talked about it last week, but there isn't a Ravens running back you can play with any confidence any given week. Based on opportunity, Ingram is the lead back here, but he ranks outside the top 45 running backs in the category. Sure, you can make the case that his opportunity is more valuable because it's in the Ravens offense, but when a player has been capped at 11 touches with nearly one-third of the season gone, that's a real problem. Even worse is that Dobbins' role hasn't grown at all. In fact, the seven touches he had in Week 1 was his career high. The Eagles have not been a defense to attack with running backs, either. Over their last 21 games, they've allowed just eight running backs to eclipse 15 PPR points, so the ceiling has been capped. As for the floor for someone like Ingram, they've allowed just 3.62 yards per carry on the ground since the start of last year. There have been just four running backs who've rushed for more than 66 yards against them in that time, which is just flat-out ridiculous. There have been just two running backs who've finished as top-20 options with fewer than three receptions, and those running backs were Rashaad Penny (who broke a long touchdown run) and Peyton Barber (who scored two touchdowns). Without a multiple-touchdown game, Ingram won't crack the top-20 running backs. He's a touchdown-or-bust low-end RB3/high-end RB4 option whose opportunity is just not there. Dobbins has 25 touches through five games, which is not nearly enough to be considered in fantasy, so he remains just a high-end handcuff until we see the tide shift with Ingram.