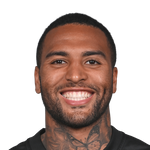 He's now seen five targets in back-to-back games, but what you really need to know about is the trends in his playing time. His routes run have gone: 16, 17, 17, 12, 31, 28. It's almost like a lightbulb went off and the Vikings started playing him more. His 59 routes in Weeks 5-6 ranked eighth among tight ends. It's paid off, too, as he's turned those 10 targets into eight receptions for 119 yards. The only concern is that opponents have targeted tight ends just 13.5 percent of the time against the Packers, which ranks as the second-lowest mark in the league. However, when targeted, they have allowed a massive 10.04 yards per target to tight ends on the season, including a 77.8 percent completion-rate. In a game where the Vikings are likely to have 35-plus pass attempts, Smith should be a quality high-end TE2 streamer (and maybe rest of season) option.