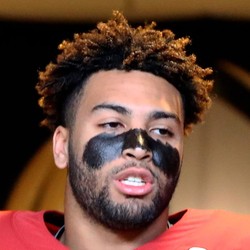 He might be one of the most athletic tight ends I've watched. It's not often you see a tight end run routes the way he does, though it does help that he's about 10-15 pounds less than a traditional weight for a tight end his height. Can be lined up all over the field (in the backfield, at fullback, in-line, out-wide, etc.) which will appeal to creative offensive coordinators. Despite his lack in weight, he's not a bad blocker, either. He has to fit a certain role in an offense, as he's not going to be a traditional tight end.

Irv Smith Jr. caught all three of his targets for 39 yards in the Vikings’ 27-10 loss to the 49ers on Saturday.

Smith Jr. really wasn't involved much in this one, accounting for 21 of is 39 yards on the Vikings' final pass play of the afternoon -- a 4th-and-22 heave that fell a yard shy and confirmed a 49ers victory. The athletic Alabama product will look to build on a respectable rookie campaign when he returns for his second season in 2020.