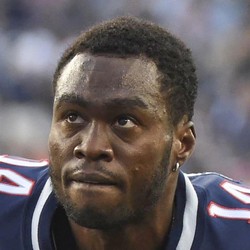 There have been just nine wide receivers who've finished as top-24 fantasy options in at least four of the last five seasons: Julio Jones, Mike Evans, Jarvis Landry, DeAndre Hopkins, Antonio Brown, Davante Adams, Amari Cooper, and... Cooks. Keep in mind he's done that while playing for three different teams, so he's essentially team-proof. Concussions were problematic in 2019 and will be a problem moving forward in his career, as another one could end it. While on the field, though, he's proven to have a WR2 floor in the NFL. We can't pretend that going to Deshaun Watson isn't an upgrade from Jared Goff, either. The issue is that Will Fuller plays a similar role and has chemistry with Watson. Cooks can likely be drafted as a WR4, but he'll be a starter when he's on the field.

The fun part is trying to figure out who will disappoint out of the Rams WR trio if they decide to continually target the TE or if the TE targets were mostly due to Cooks absence. What I hadn't realized is that Cooks only missed 2 games(Basically 3). Despite still being around the TE revolution still happened, and the consistency of the WRs suffered. Almost 2 less targets per game for Cooks in 2019 vs 2018. Passer Rating when targeted: 2019 - 88.1, 2018 - 115.9, 2017 - 106.9

Texans acquired WR Brandin Cooks and a 2022 fourth-round pick from the Rams in exchange for the No. 57 overall pick of the 2020 draft. Cooks, who has suffered some concerning (head) injuries in recent years but not missed much time, is coming off by far the worst campaign of his career. Somehow, this is the third time he's been traded in three years. He has a bad contract and has suffered at least five concussions as a pro.

Now top WR in Houston, could get back to 80 catches

Deposit $10 at a DFS partner site you have NOT played at and get a FREE 6 Month HOF Subscription!
Claim Offer
Who Should I Draft?
Most Accurate Experts
for Brandin Cooks
Consensus Rankings
View All Rankings
Do Not Sell
Are you looking to contact Customer Support about a subscription or account related question?
Yes
No, I'm a California resident looking for the California Consumer Privacy Act form