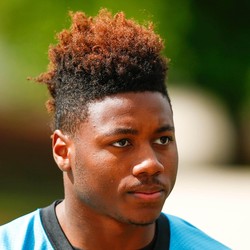 If I told you this WR had 108/1236/11 would you be interested? Now what if I told you that was in 3 years? Has trended upwards for 3 years in a row. Deep targets were infamously inaccurate last year. That made him rather terrible for fantasy football. He was miscast, running a 9 route over 1/4 of the time That situation has now been rectified with the addition of Robby Anderson. I think Samuel's chances at fading into a WR3 forever are just as likely as some kind of breakout. Most players don't have a Devante Parker like resurgence after years of being mediocre. They turn into Phillip Dorsett, an 83rd percentile sparq-x athlete who had greater college production and breakout age than Samuel, while also being a 4.3 guy we just can't let go of. However, I went back to watch all his deep incomplete passes myself for 2019. The majority were inaccurate. Sometimes the QB had to release the ball early because of the rush. Others, Samuel was out positioned, or not big enough to go up and get it. He also some just flat drops, but all of those happening were in the minority of what was happening on his deep looks. Fighting for targets underneath with DJ Moore will be no easier than trying to catch deep passes from Kyle Allen, but he'll at least have more accurate balls coming from Teddy Bridgewater, while having great, to elite numbers against man coverage 2 years in a row to give himself a great opportunity in this new offense.

The quarterback play was atrocious in Carolina last year, but it was Samuel who was the least efficient of all the pass catchers. In fact, among the 157 wide receivers who've seen at least 100 targets over the last five years, Samuel's 0.96 yards per route run was the worst. There's so much competition for targets with D.J. Moore, Robby Anderson, Christian McCaffrey, and Ian Thomas, it's hard to see Samuel being a consistent fantasy option.

Lukas Kacer - The Fantasy Stock Exchange13 weeks ago
Who Should I Draft?
Most Accurate Experts
for Curtis Samuel
Do Not Sell
Are you looking to contact Customer Support about a subscription or account related question?
Yes
No, I'm a California resident looking for the California Consumer Privacy Act form