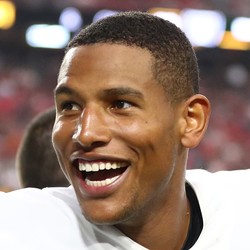 Waller was one of last year's breakout stars and he helped propel several rosters to fantasy football championships. Now, his price tag has certainly gone up and you're betting on that production repeating this season. Waller certainly has more competition for targets so he could see his total from last year drop down, but he absolutely could make up for it with an increase in touchdown production. Waller's a fine selection in the mid-rounds, but he may not possess as high of a ceiling as he did last year.

He had a special season last year that was replicated by only 4 TEs in the last 20 years.

There was just one tight end in all of football who finished all 16 games with at least 7.0 PPR points. It was Waller. Not only that, but he also offered a ceiling, hitting 16-plus points on five separate occasions. The issue with relying on that again is the new competition for targets. As much as we don't want to consider Jason Witten a threat, he's going to steal some targets. Not just him, but Henry Ruggs, Lynn Bowden, and Bryan Edwards are all guys who'll demand some sort of target share. I still view Waller as a top-five tight end, though he's teetering there.

Waller was extremely consistent last year and managed to finish #4 among fantasy tight ends but he was virtually the only receiving threat on the entire team. Now that they grabbed three quality wideouts in the draft, his target share should take a big of a step back. Even so, he is one of the few reliable tight ends.

Waller had 1,150 yards from scrimmage and 3 touchdowns, he established himself as the top playmaker in the Raiders passing game and he should have another big season in 2020.

Slightly worried about his involvement when additional weapons arrive but that's a future worry. Took advantage of his opportunities in 2019.

Could make a case for the 4 spot, but he's already 27 years old. Showed absolute dominance at the position as a pass catcher, but I'm predicting a turn to Mariota in 2020. Let's hope he can develop chemistry early.

Scott Engel - RotoBaller15 weeks ago
Who Should I Draft?
Most Accurate Experts
for Darren Waller
Do Not Sell
Are you looking to contact Customer Support about a subscription or account related question?
Yes
No, I'm a California resident looking for the California Consumer Privacy Act form