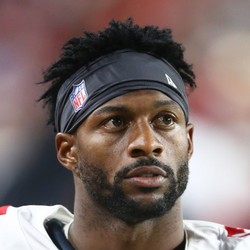 Has the season worn on Sanders a bit? He's almost 33 years old and made a miraculous comeback from an Achilles injury, which essentially never happens. He's now seen just 16 targets over his last four games, though it certainly didn't help his production to know that Garoppolo completed just 11 passes last week. In fact, Sanders hasn't recorded more than four receptions in eight of his last nine games, which makes you a bit worried in a PPR format like DraftKings. The Packers make you do a double-take, though, as they have allowed 21 different wide receivers tally 50-plus yards against them this year. Sanders isn't at one spot on the field more than 39 percent of the time, so he'll see a mixture of all Packers cornerbacks. He was trying to play through a rib cartilage injury the last time they met, so he played just 32-of-48 snaps and saw just one target. The issue is that he's totaled most of his production at RWR for the 49ers, which is where he'll see Jaire Alexander, who is the best cornerback on the Packers roster. Sanders isn't safe enough for cash lineups. He has just one game over 61 yards since Week 9, so he's not a great tournament play, either, but you don't want to cross him off entirely knowing he's flashed multiple 100-plus-yard games this year.

Sanders had only 1 reception for 15 yards the last time these teams played, he should have a bigger role in the offense this time around.

Deposit $10 at a DFS partner site you have NOT played at and get a FREE 6 Month HOF Subscription!
Claim Offer
Who Should I Start?
Most Accurate Experts
for Emmanuel Sanders
Consensus Rankings
View all Flex Rankings