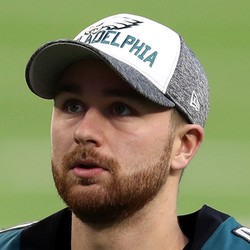 Big things have been expected of the Eagles since their Super Bowl success and they continue to disappoint. Injuries and a lack of quality have specifically hurt Jake Elliott, as he's a strong and consistent kicker who will take the opportunity if it's given to him.

Ben Wasley - The Fantasy First Down5 days ago

Elliott actually had his most accurate year of his career (84.6% field goal percentage, 35-of-37 extra points made), but he simply saw fewer chances. After seeing 31 field goal attempts in each of his first two seasons, he saw just 26 last year, and only 11 from at least 40 yards. The Eagles offense should be somewhat better this year if the team can avoid similar devastating injuries to its receivers, which should mean more chances for Elliott. He's a borderline starter in 12-team leagues.

Very dependable for accuracy, with a career 86.7 mark on FGs

Scott Engel - RotoBaller8 weeks ago
Who Should I Draft?
Most Accurate Experts
for Jake Elliott
Do Not Sell
Are you looking to contact Customer Support about a subscription or account related question?
Yes
No, I'm a California resident looking for the California Consumer Privacy Act form