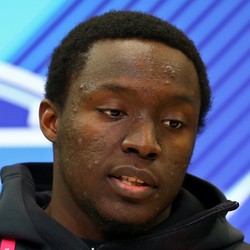 Has everyone given up on James Washington too early? He quietly led the Steelers receivers in yards (735) last year despite trailing Diontae Johnson by 12 targets. His 9.2 yards per target was also much higher than JuJu Smith-Schuster's 7.8 yards per target. The issue is that the Steelers drafted another perimeter option in Chase Claypool, and it seems unlikely that they send Johnson back to the bench. Washington will be battling with Claypool for the No. 3 job in the offense, which will have streaming appeal.

Throw out everything that happened for any Steelers receiver in 2019. The combination of Mason Rudolph and Devlin Hodges would (and did) sink any pass-catcher they came across. With Ben Roethlisberger back under center, there's some optimism as a vertical threat, but he's certainly been passed by Diontae Johnson in terms of "breakout Steelers receivers." With Chase Claypool also in tow, Washington's chances of fantasy relevancy seem dim, and he's more of a "handcuff" receiver to Johnson and JuJu Smith-Schuster.

Lukas Kacer - The Fantasy Stock Exchange13 weeks ago
Who Should I Draft?
Most Accurate Experts
for James Washington
Do Not Sell
Are you looking to contact Customer Support about a subscription or account related question?
Yes
No, I'm a California resident looking for the California Consumer Privacy Act form