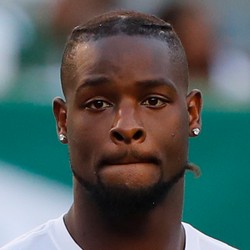 Kind of betting on him to not have a more productive year, because RBs typically don't as they age. This is standard RB decline, despite whatever excuses he has. Gase also seems to be pretty good at ruining fantasy value. HOPEFULLY his line play is better but we don't know that until we see it. Yes, they replaced everyone, but I feel like we get in off-season mode where we just assume everything and everyone will be better without any evidence of it. Volume should keep him afloat.

Adam Gase seems intent on taking the ball out of Bell's hands and splitting the work among his other running backs. Frank Gore and Lamical Perine are both going to eat into Bell's touches and it's going to limit his production. Bell is nothing more than a low-end RB2 in this Jets offense, despite being one of the more talented running backs in the NFL.

Bell's talent is slipping with age/mileage, and his environment took a hit going from PIT to NYJ - now HC Gase is looking to diminish his last bankable asset - workload

Brandon Funston - The Athletic4 weeks ago

Last year there were only 3 RBs to have 240+ rushing attempts and 75+ targets. I think we would be expecting some "positive" regression for Bell, especially in the TD department, but it seems that Gase is a subscriber to the "RB's don't matter" philosophy. I expect Gore, Perine or one of the journeymen the Jets have horded to cut into Bell's upside.

Le'Veon Bell once again proved that situation often trumps talent for running backs, as a mediocre O-line and Adam Gase led to a Derrick Henry level of volume (10 fewer touches) for 100 fewer fantasy points. Bell has massive room for improvement though, as he has no true competition (sorry La'Mical) and huge regression upside. Bell's never been a high TD guy or overly efficient but 4 yards per carry and 8 total TDs isn't an unreasonal expectation and that would mean a top 10 finish. Bump those up a little and he becomes a league winner. He's a great third round gamble you can pair with any of the riskier RBs like Fournette, Drake, Carson, CEH and Sanders.

Ben Wasley - The Fantasy First Down6 weeks ago

You're going to see Bell fall down draft boards this year, and further than he should. That's odd for me to say, as Bell was someone I was avoiding like the plague in drafts. The difference? Expectations. Playing him as your first-round pick in your RB1 slot was never something anyone should've expected, especially behind that offensive line and in Gase's offense. While he's still stuck in Gase's offense, the offensive line was upgraded quite a bit this offseason, which should allow Bell more room to work. Even if he repeated his 2019 performance, that's RB2 production. There were just 11 running backs who produced RB2 or better numbers more often than him. Sure, he didn't have a ton of weekly upside, but he was safe. Now coming off the board outside the top three rounds, Bell is a value play.

Bell should benefit from the Jets adding T Mekhi Becton and WR Denzel Mims in the NFL Draft. They also added RB La'Mical Perine in the 4th round, but he should not be a huge threat to Bell's touches this season.

Lukas Kacer - The Fantasy Stock Exchange14 weeks ago
Who Should I Draft?
Most Accurate Experts
for Le'Veon Bell
Do Not Sell
Are you looking to contact Customer Support about a subscription or account related question?
Yes
No, I'm a California resident looking for the California Consumer Privacy Act form