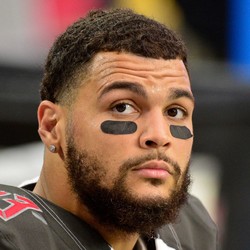 Evans could see a slight step backwards with Tom Brady behind center now, but he's still going to be incredibly productive. Brady can still air the ball out downfield and those targets are incredibly valuable for Evans' fantasy production. Brady's going to learn to trust Evans early on and he'll see plenty of targets this year. Evans should be a consistent WR2 option all season long with upside.

One of NFL's premier power forward receiving targets has topped 1,000 in all 6 of his NFL campaigns, averaging 8 TDs - over 17 YPC each of past 2 seasons

Brandon Funston - The Athletic3 weeks ago

Evans has now finished as a top-10 receiver in 4-of-6 seasons with the Bucs, but will he lose some of his massive target totals from years past? Evans has continually been peppered with targets by Jameis Winston, as he was willing to trust the receiver in jump-ball situations. Tom Brady isn't a risk-taker, as evidenced by his low interception totals. With the ascention of Chris Godwin, arrival of Rob Gronkowski and Keshawn Vaughn, and likely declining pass attempts in the Bucs offense, Evans may lose some of his top-end upside, though he should still remain in the low-end WR1 conversation.

What he loses in volume will be offset with accuracy. He got 120 targets and caught 67. He could turn that same 120 into 85 with TB12. @DFFMemphis

Evans had 1,157 yards receiving and eight receiving touchdowns as the deep threat in this offense. He is probably the player most hurt by the acquisition of QB Tom Brady, Brady has always been more about short passes and his arm strength was suspect at the end of last year.

Lukas Kacer - The Fantasy Stock Exchange13 weeks ago
Who Should I Draft?
Most Accurate Experts
for Mike Evans
Do Not Sell
Are you looking to contact Customer Support about a subscription or account related question?
Yes
No, I'm a California resident looking for the California Consumer Privacy Act form