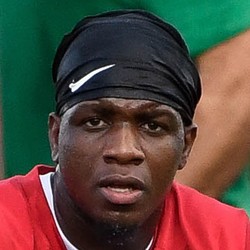 Sanu's been a steady fantasy contributor over the past few seasons, but his production fell off last season after the trade to New England. He's now got a full offseason of adjusting to this system, but there may simply be too many other options in this receiving corps for him to be a reliable fantasy option this season. Unless we get word that he's going to be a full-time starter, I'd recommend avoiding him this season.

It's crazy to think the Patriots gave up a second-round pick for Sanu last year, especially when you know he'll turn 31 later this year. He's going to start for them, and it's possible his value went up with Cam Newton's signing, though it's important to remember Newton has thrown more than 24 touchdowns in his career just once. Still, Sanu tried playing through injuries with the Patriots last year and it affected his production. He may have some bye week streaming appeal if Newton can get his career back on track.

Sanu is "faster, quicker, leaner and in better shape" after offseason ankle surgery, according to his trainer Hilton Alexander. Hahahahaha!!!

The Patriots surprisingly gave up a second-round pick for Sanu in the middle of the 2019 season. Unfortunately, he didn't live up to his cost. After seeing 14 targets and catching 10 passes for 81 yards and a score in his second game, he failed to top three receptions or 35 yards in any of his remaining seven games, including the post-season. He'll be back with the Patriots again this year, but without Tom Brady, and with a career of mediocre totals, it's unlikely that Sanu will be worth drafting in fantasy circles.

Lukas Kacer - The Fantasy Stock Exchange13 weeks ago
Who Should I Draft?
Most Accurate Experts
for Mohamed Sanu
Do Not Sell
Are you looking to contact Customer Support about a subscription or account related question?
Yes
No, I'm a California resident looking for the California Consumer Privacy Act form