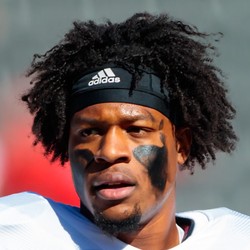 Up with the addition of Cam, but not getting too crazy with his ranking just yet..

Despite spending a first-round pick on Harry last year, the Patriots targeted Harry more than four times just once, and it came in Week 17. The Patriots still have Julian Edelman and Mohamed Sanu on the roster, and neither of them are going away. Now you take away Tom Brady and add in the uncertainty of Jarrett Stidham under center, and it's enough to make Harry essentially a non-factor in fantasy.

Here's another player who I am not willing to sell low on. If you're selling, make sure to get a player in this range, but if you're buying, offer something in the mid to late 30s.

Opportunity should be there for him to start contributing in 2020

Scott Engel - RotoBaller14 weeks ago
Who Should I Draft?
Most Accurate Experts
for Wide Receivers
Do Not Sell
Are you looking to contact Customer Support about a subscription or account related question?
Yes
No, I'm a California resident looking for the California Consumer Privacy Act form