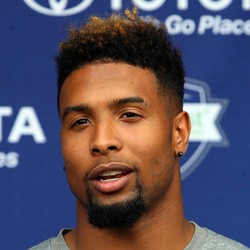 Odell saw 137 targets last season and received a 26% target share, which led the team. Odell saw 15 targets in the red zone, but only came down with 1 TD in goal line situations. He finished with 4 TDs on the season. During the offseason Odell had sports hernia surgery and it was reported that he is near full health. In an interview he stated, "I would honestly say this is probably going to be one of my best seasons -- bigger, stronger, faster. This my time.'' Odell saw the 3rd most air yards last season, with 1,801. He is due for positive regression in a few different areas. @gnarlynickk

Many have already moved on from Beckham, like he wasn't a top-three receiver whenever he took the field for the first five years of his career. I'm unwilling to move him out of the top-10 receivers when practically everyone on the Browns was a disaster last year. Despite his bad 2019 season, Beckham has been a WR2 or better in 64.0 percent of the games over his career. The only players with better rates over their career are Michael Thomas, Julio Jones, and Antonio Brown.

Mulligan please. Played the year hampered by his core and a coach. Odell Beckham in the Kevin Stefanski, Stefon Diggs role would be awesome because Odell is better..Odell had the second most deep targets in 2019, with some of the worst production. Only the Carolina duo had worse numbers, of WRs with at least 21 deep targets, go figure.

OBJ had a horrible first year in Cleveland with 1,045 yards receiving and 4 receiving touchdowns. He is a WR2 without much upside, unless they figure out how to turn this passing offense around.

Can return to WR1 status if Mayfield rebounds

Deposit $10 at a DFS partner site you have NOT played at and get a FREE 6 Month HOF Subscription!
Claim Offer
Who Should I Draft?
Most Accurate Experts
for Odell Beckham Jr.
Consensus Rankings
View All Rankings
Do Not Sell
Are you looking to contact Customer Support about a subscription or account related question?
Yes
No, I'm a California resident looking for the California Consumer Privacy Act form