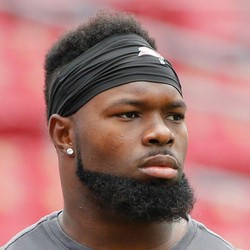 Tampa Bay linebacker Adarius Taylor reportedly was outmatched along with all the other linebackers in Sunday's loss. He did record six combined tackles and a forced fumble, which is decent "production by default" if this is the case of going forward and outmatched or not.

Simple mathematics, Taylor saw 98% of the allowed defensive team snaps. Riley Bullough started and played about 55%, he had two solo tackles. Devante Bond was at 81% with just two combined. Production by default counts in IDP. This is it, maybe for the rest of the season. In a lost cause scenario, how excited can they be to risk Lavonte David (knee), who suffered an MCL sprain a week ago and wasn’t able to practice this past week?