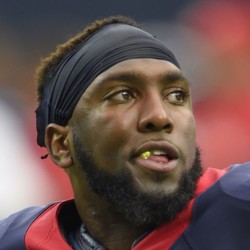 Akeem Hunt does little against the Broncos

Akeem Hunt rushed four times for 25 yards and had one catch for four yards on Sunday against the Broncos.

It looked like Hunt would get substantial work on Sunday, but his five touches barely made a dent. Hunt is under contract for next season, but with Kareem Hunt showing he can carry a full load, Akeem Hunt won't be very relevant next season.