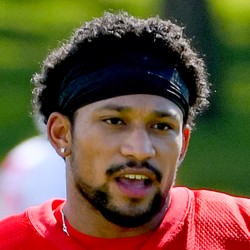 Will Chan Gailey's reputation of highlighting slot receivers benefit someone like Wilson, who's been the Dolphins slot receiver when healthy, or will it be Mike Gesicki? Wilson has been efficient with his targets over the years, but has never received enough of them to be consistent in fantasy. With DeVante Parker and Preston Williams healthy, it's hard to see Wilson topping his career high of 62 targets in 2019.

Dolphins WR Albert Wilson has agreed to a renegotiated one-year deal with Miami with a base value of $3M and another $1M worth of incentives.

(2020)
View Full Schedule
Who Should I Draft?
Most Accurate Experts
for Albert Wilson
Do Not Sell
Are you looking to contact Customer Support about a subscription or account related question?
Yes
No, I'm a California resident looking for the California Consumer Privacy Act form