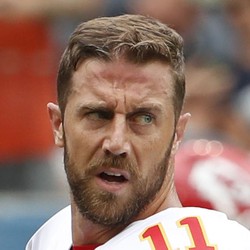 In a recent interview with Fox 5 DC’s Angie Goff, Smith talked about his recovery from a leg injury, subsequent infections, and his plan to play football again.

In the interview, Smith opened up about the gruesome leg injury he suffered in Week 11 of last season and all of the struggles he’s gone through to get healthy again. When asked if he plans to play football again, Smith answered, “that’s the plan.” It’s yet unclear if Smith will ever actually be able to return to the game, and Washington drafted Ohio State QB Dwayne Haskins with the 15th pick in this year’s NFL Draft.

Deposit $10 at a DFS partner site you have NOT played at and get a FREE 6 Month HOF Subscription!
Claim Offer
Most Accurate Experts
for Alex Smith
Consensus Rankings
View All Rankings