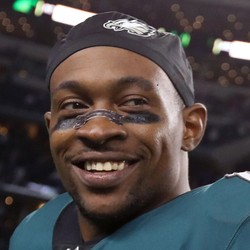 Since joining the Eagles in 2017, Jeffery has played 38 games for them. In those 38 games, he's finished with WR1-type numbers 10 times, while posting WR2 (or better) numbers 16 times. For someone who's being drafted outside the top 40 wide receivers, that's pretty dang good. Sure, you have to worry about injuries, but when you have him as your WR4 or WR5, you're not too concerned.

According to Eagles insider Dave Spadaro, the Eagles plan to utilize WR Alshon Jeffery in a big way in 2020.

Spadaro writes, “a healthy and fully focused and hungry Jeffery would be a huge boost for the offense. He eats up defensive backs and the Eagles are fully aware that the last complete game Jeffery played was at Miami, on December 1, and he caught nine passes for 137 passes and a touchdown. He was dominating. Having Jeffery back all the way is an important piece in the offensive puzzle for 2020.” Jeffery missed six games last season due to the Lisfranc injury, but still managed to haul in 43 catches for 490 yards and four TDs. While his production has tailed off quite a bit since his early days in Chicago, the 30-year old has shown an ability to be a reliable option when healthy. The Eagles went out and took WR Jalen Reagor in the first round of the 2020 NFL Draft, but he shouldn’t cut in to Jeffery’s production. If anything, Reagor might stretch the defense more, taking a safety with him, leaving Jeffery with one-on-one coverage on the outside. Jeffery is currently ranked #51 in FantasyPros consensus WR rankings, but if he can put together a full season of high-level production, he could finish as a WR3 or WR4 in most fantasy leagues.

Deposit $10 at a DFS partner site you have NOT played at and get a FREE 6 Month HOF Subscription!
Claim Offer
Who Should I Draft?
Most Accurate Experts
for Alshon Jeffery
Consensus Rankings
View All Rankings
Do Not Sell
Are you looking to contact Customer Support about a subscription or account related question?
Yes
No, I'm a California resident looking for the California Consumer Privacy Act form