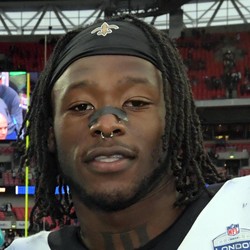 The Panthers continue to be the worst against RBs, giving up 850 rushing yards to RBs over the past five weeks. Kamara is a RB1 this week, with the Saints competing for a first-round bye still.

Kamara, while still being a solid fantasy player, was a disappointment overall given his expectations entering the 2019 season. It would make sense that he was dealing with injury last year given his less productive campaign. He's currently the RB6 in our early expert consensus rankings, and he could provide solid value at that point in fantasy drafts if he's able to return to 2018 form.

Deposit $10 at a DFS partner site you have NOT played at and get a FREE 6 Month HOF Subscription!
Claim Offer
Who Should I Start?
Most Accurate Experts
for Alvin Kamara
Consensus Rankings
View All Rankings