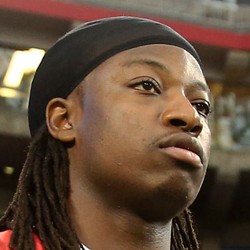 Andre Ellington released by the Bucs

Andre Ellington has been released by the Buccaneers.

Ellington couldn’t quite make it to the Bucs final roster. He recently rushed for nine yards and caught both of his targets in Thursday’s preseason game against the Cowboys. Dare Ogunbowale beat out Ellington for the third running back role. Ellington will look to latch onto another team, but there might not be much of a market for him.